Does your tween want a totally rad 80’s party?  Don’t know where to start or what to do?  We can help with that!  Read on for some tips on throwing an awesome 80’s theme birthday party that your tween will love! 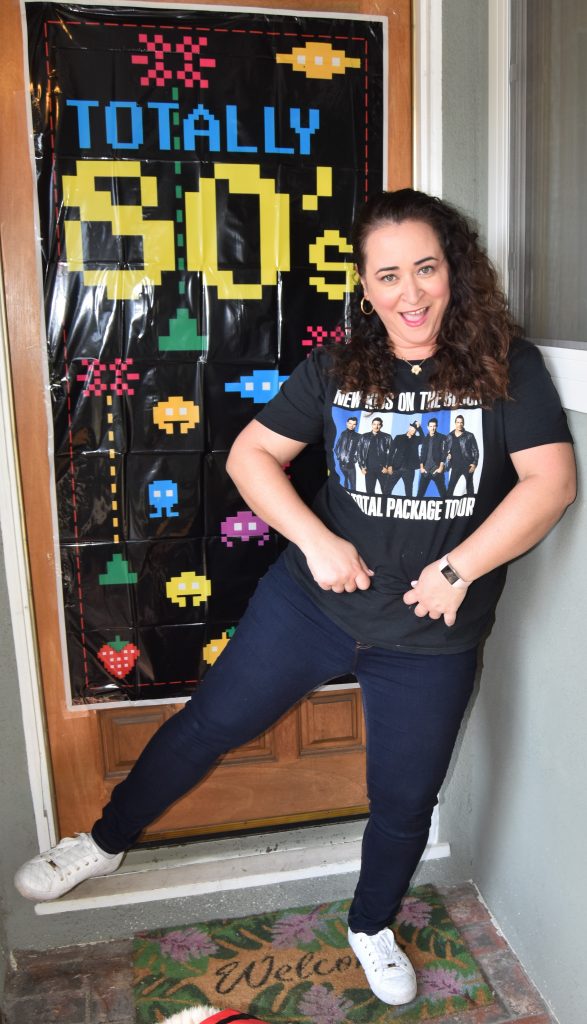 This post contains Amazon Affiliate links.  This website will earn a commission on qualifying purchases.  I will be sharing items that I ordered on Amazon, along with others that are available on Amazon, to put together a great party. 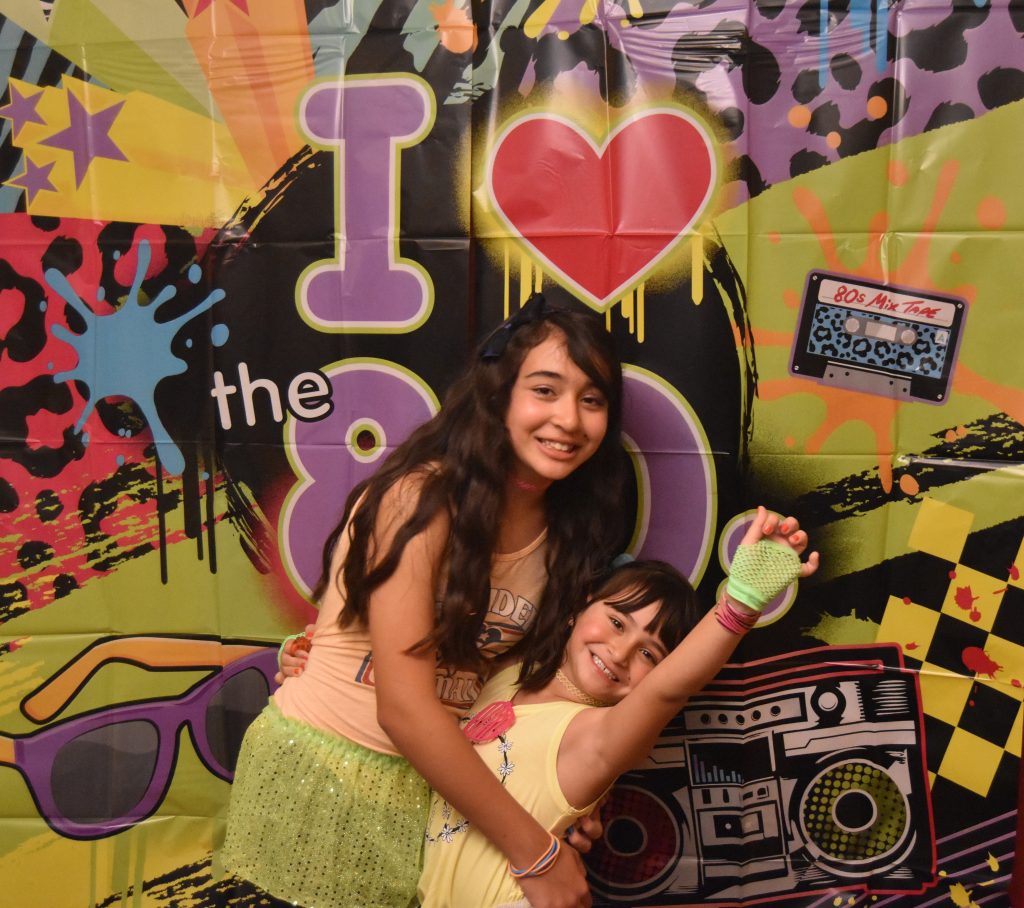 My oldest daughter had her birthday coming up and wanted to throw a party at home.  As usual, she requested one of the most obscure party themes that a kid can ask for- 1980’s.  Sure, there is some cheesy, mass produced decor you can find at the party store.  However, your kid doesn’t want those lame store decorations when she knows you’re capable of making something more interesting.  😀 😀 😀

And then…there is the fact that I’ve never thrown a party for tweens before.  I was scared people…very scared.  Needless to say, I ran to Pinterest for ideas, but there was not a whole lot about 80’s theme parties for tweens.

Thankfully, I am an Amazon Prime member and was able to order a lot of items online and have them delivered to my doorstep.  Thank you to the Amazon Prime powers that be, because I was able to throw this party together on short notice.  I found most of the items needed for the party on Amazon.  However, there are some instances in which I found a better deal in stores and made the drive out.  You will find that some products just aren’t available in store or tend to be back-ordered, so Amazon came to the rescue!

I’ll lay out below what I did for entertainment, decor, and party favors/accessories.  To my pleasant surprise, the kids really enjoyed the party.  Phew!

My tween insisted that there HAD to be karaoke at the party.  I’m not gonna lie, I was a little nervous about this one.  Surprisingly, this was a hit at the party!

My hubby hooked up the kid’s chromebook to the t.v. receiver so that the kids could select their music and read the lyrics on the t.v. screen.  We got YouTube Premium for Karaoke and to avoid commercials. 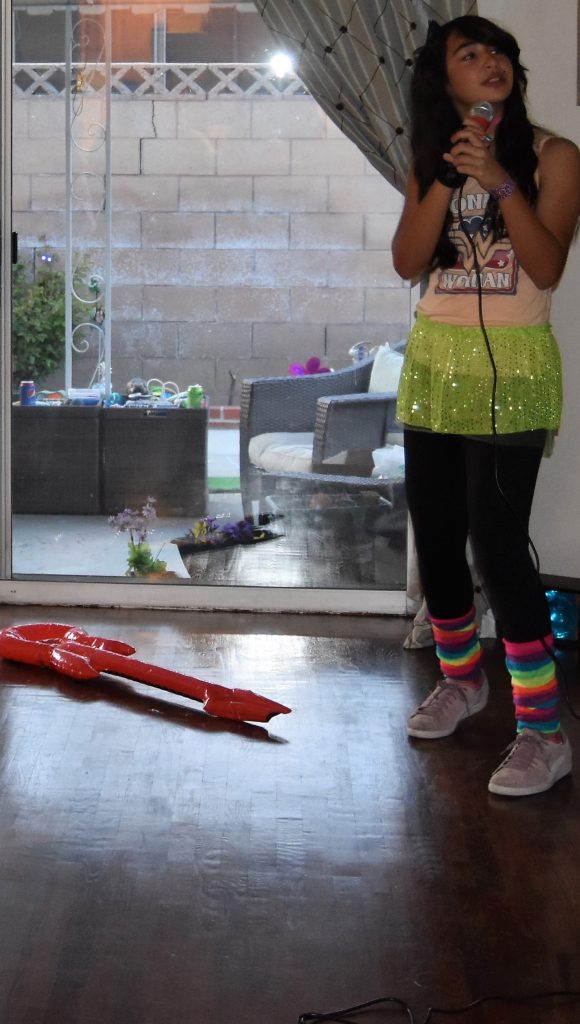 Our Naabi speaker came in handy for the karaoke portion of the party.  We thought kids might be more comfortable singing in pairs instead of individually (we were right) and wound up buying a second microphone.

You might find (like we did) that the kids get a little crazy about whose turn it is to sing.  Make your life easier by having each kid write their name and song title they want to sing on a piece of paper.  Then, place these papers in a hat and pick a name to determine who is up next to sing.  You are welcome! 😉

Another request for the 80’s party?  A dance party!  Of course, I was picturing kids at my school during school dances.  Most people would watch from the sidelines.  What to do?  Make it a GLOW IN THE DARK dance party.  Genius!!!  It was so much fun and I highly recommend it. 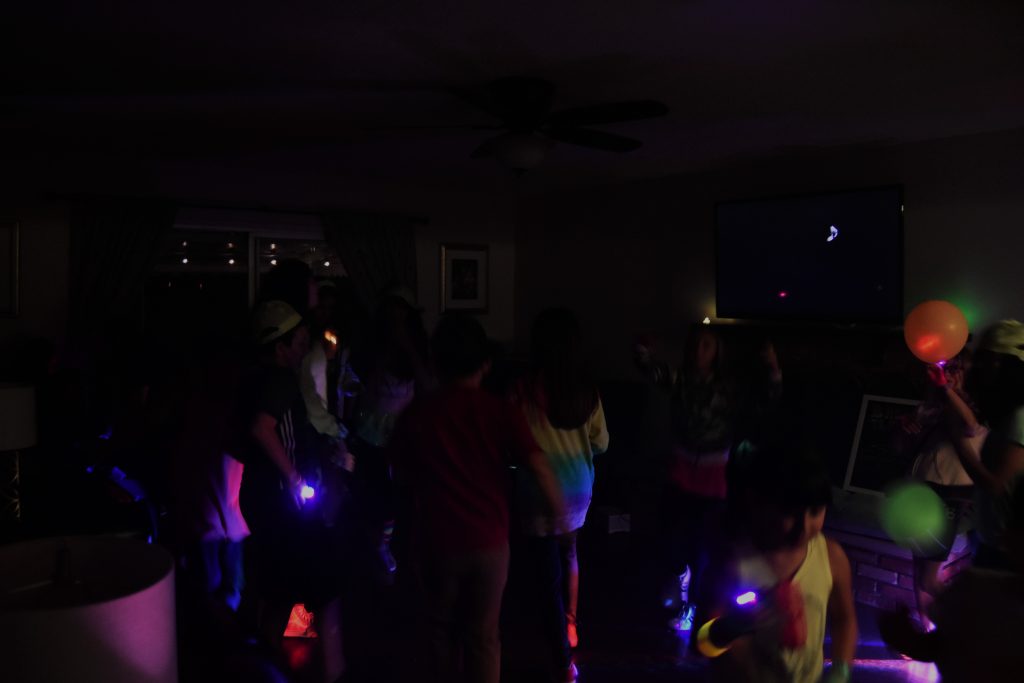 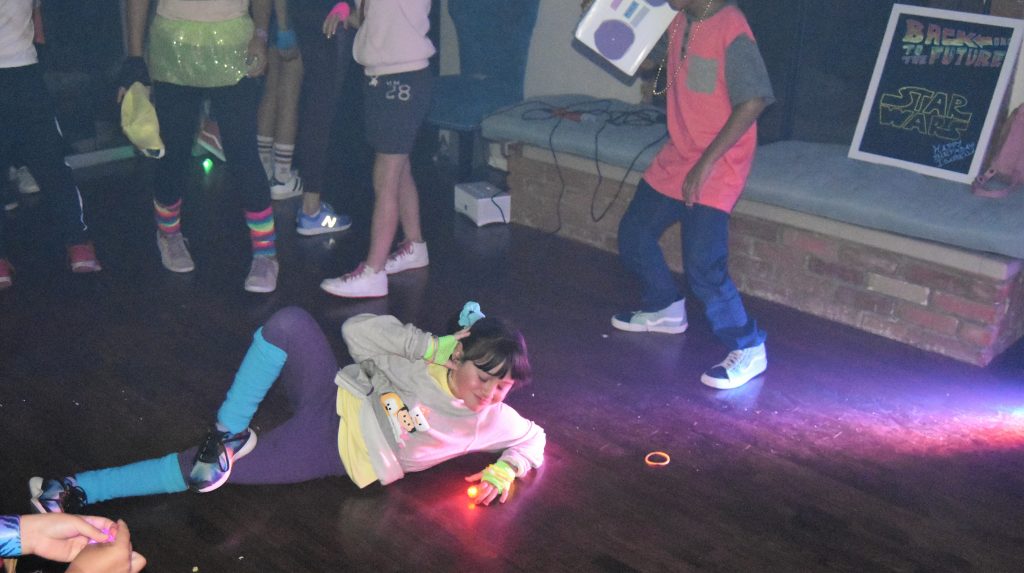 As with anything, be sure to check that the lyrics are ok.  You don’t want parents calling you up to complain about whatever music was on.

If you don’t want to sign up for Spotify Premium, did you know that Amazon Prime includes a music library?  It’s great!  Prime isn’t just good for getting items delivered in 2 days.  There are so many perks to Amazon Prime membership!  There is an 80’s music playlists/stations that is great. 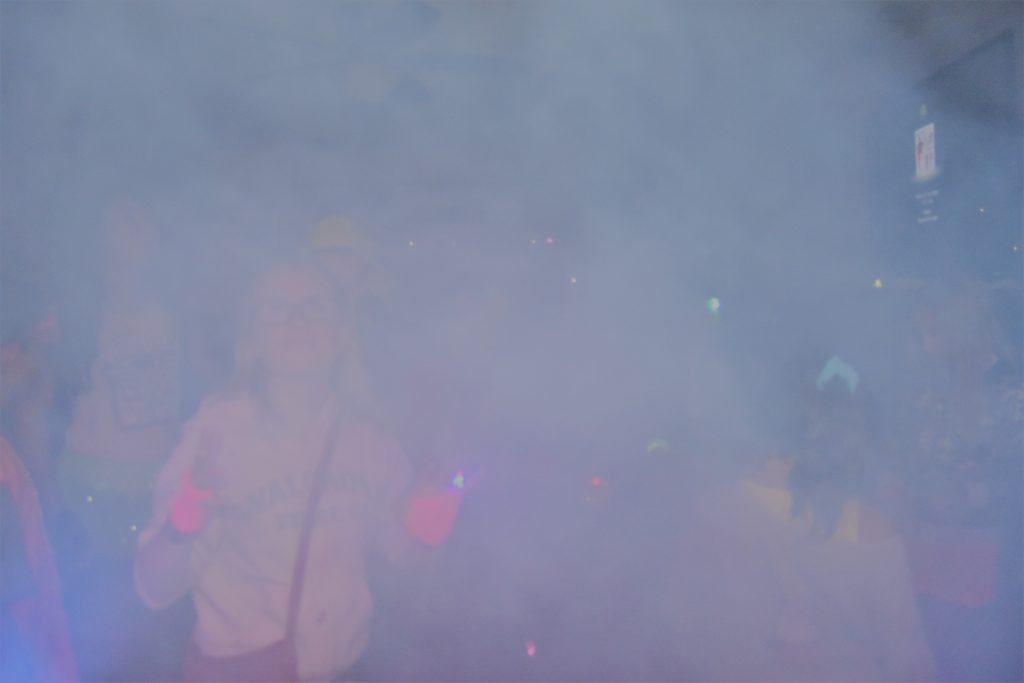 Aside from the glow in the dark decor, I went for a PacMan decor theme and some backdrops in the dining area of my home. 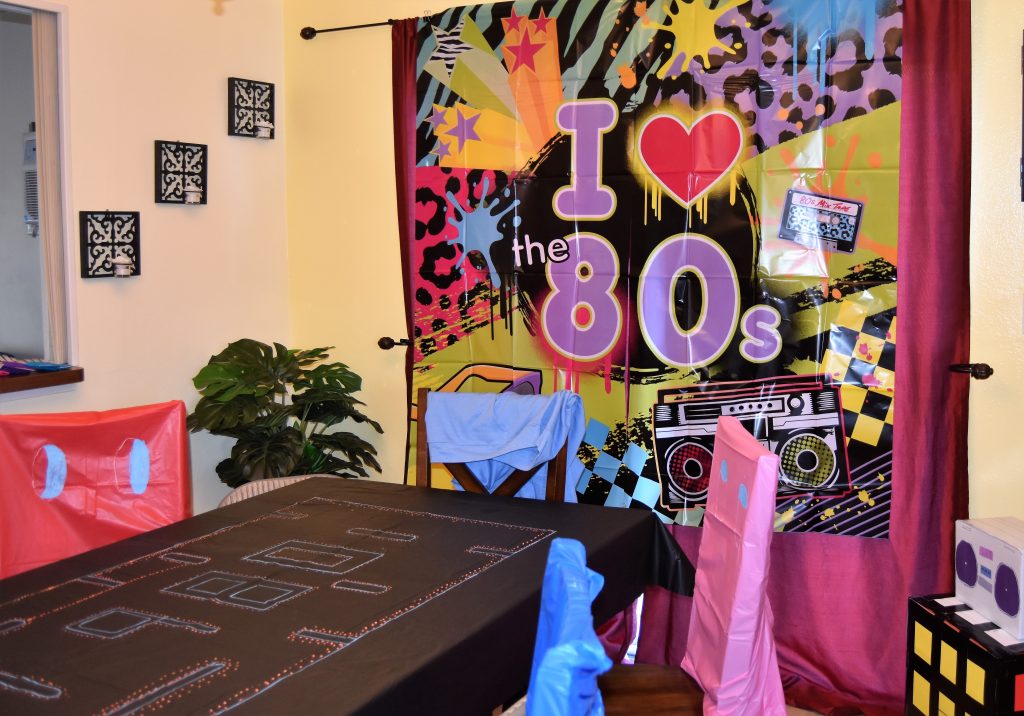 Table cloths made the perfect material for creating a PacMan theme table at the party.  I covered the table with a plain black table cloth and used chalk markers to paint a PacMan game board on the cloth.  You can find a link the chalk markers that I used to make the table design.  I found these markers at the Pinners Conference and Expo.  They are excellent quality. 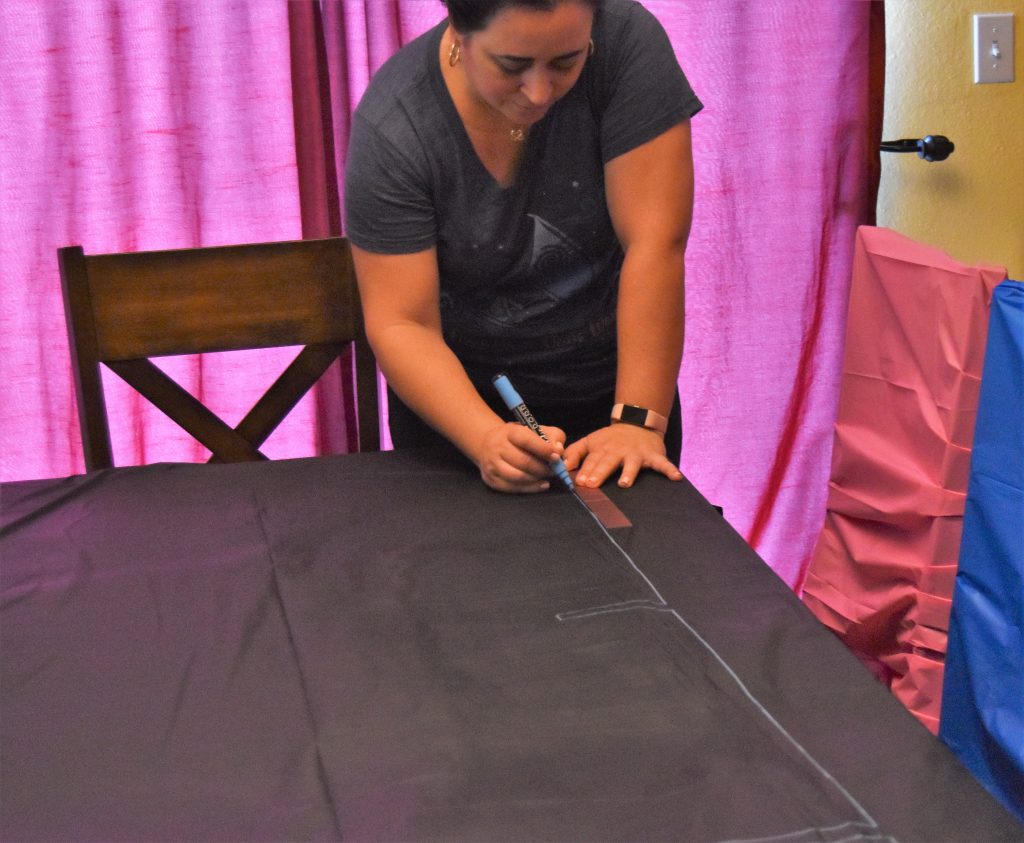 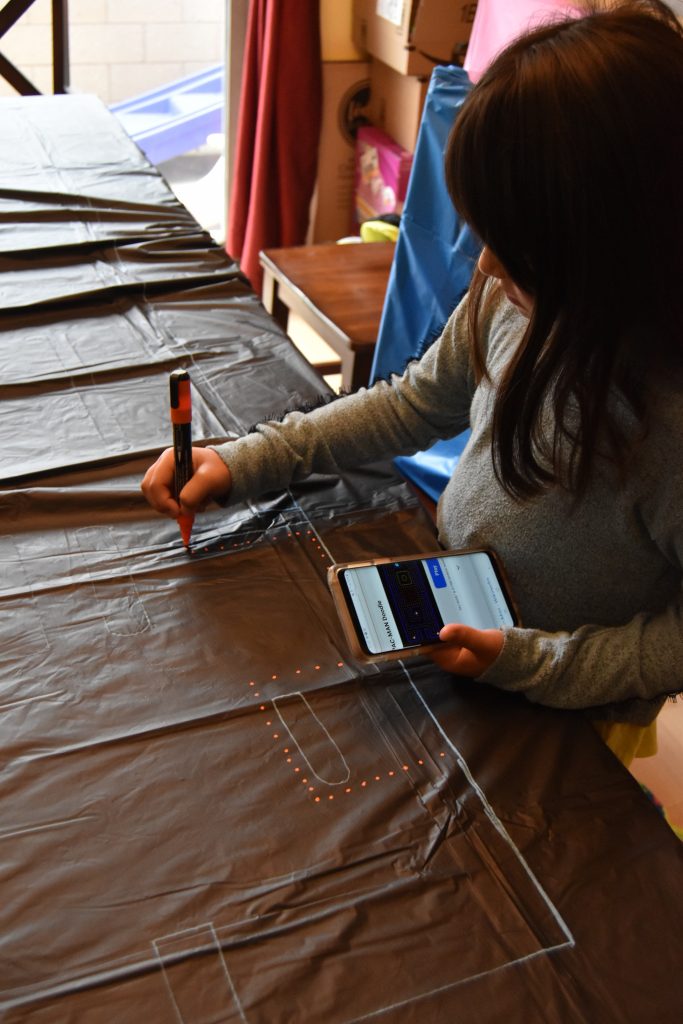 Next, I took table cloths of various primary colors and tied them around the chairs at the dining table to make PacMan ghosts.  I tied them back with clear packing tape (classy, I know).   Once again, we used the chalk markers to draw eyes on the ghosts. 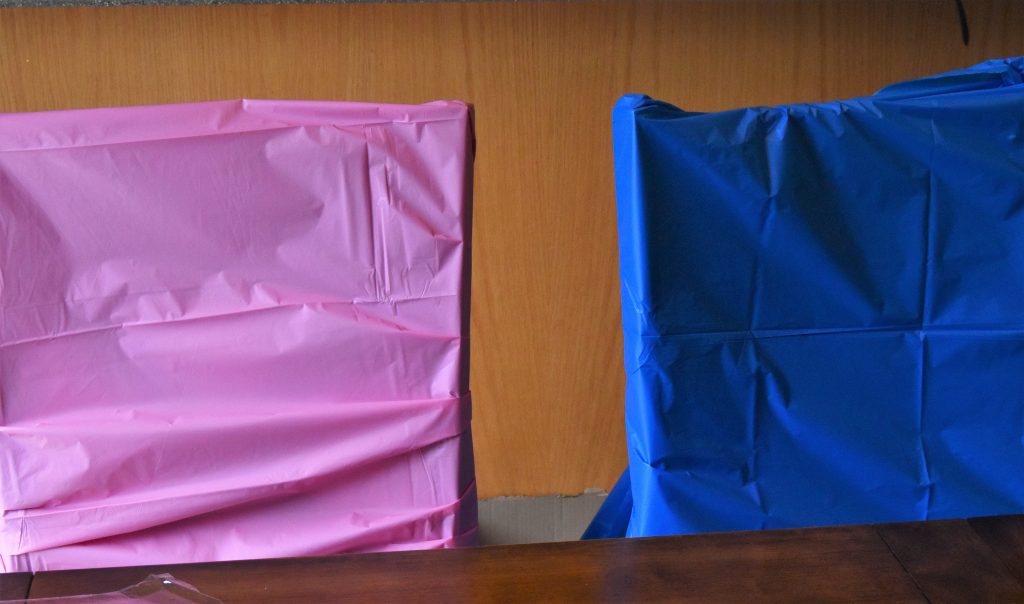 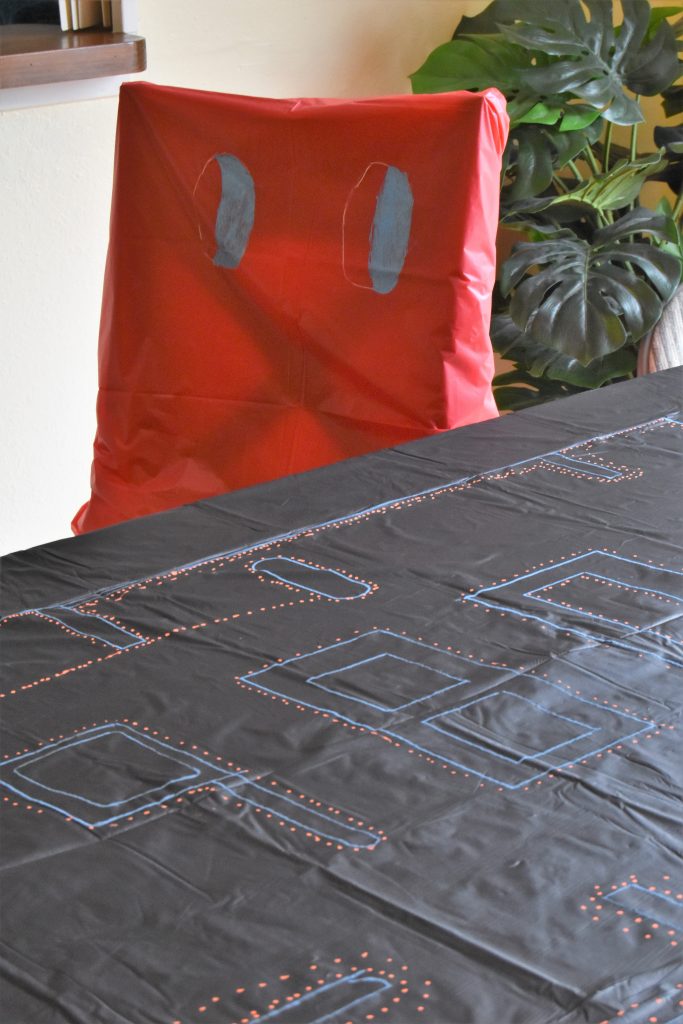 I recommend purchasing the table cloths at a local dollar store as you will use many!

We have an archway in our home and used it to make an extra-large PacMan ghost!  Be sure to use painters tape when hanging it on your walls. 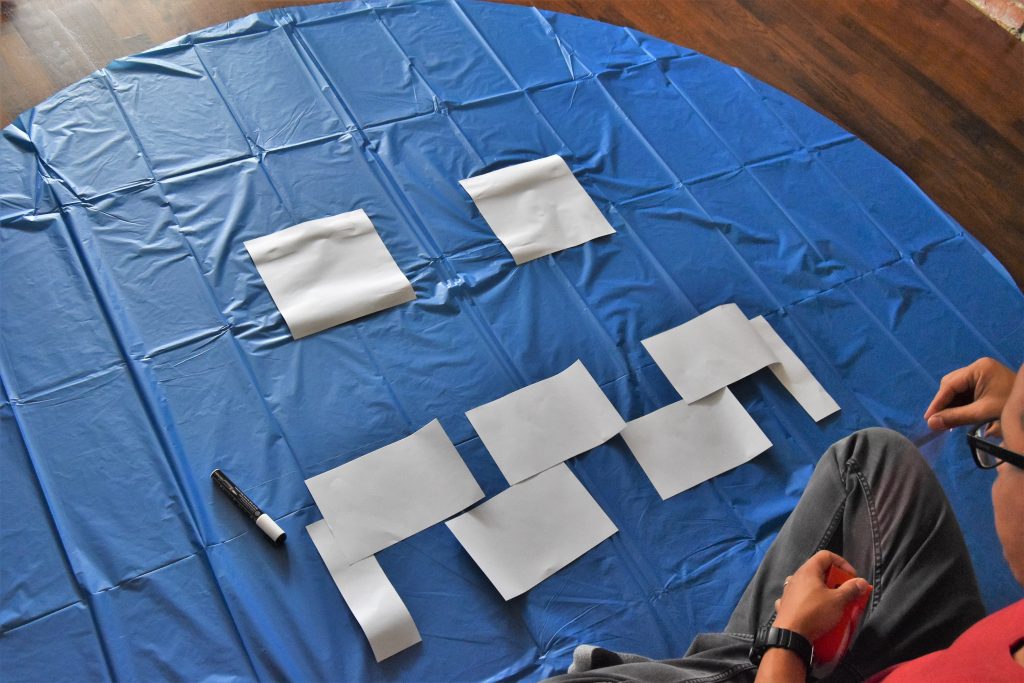 We also used a chalk board to draw some 1980’s theme movie titles.  Credit goes to my husband for this work 😉 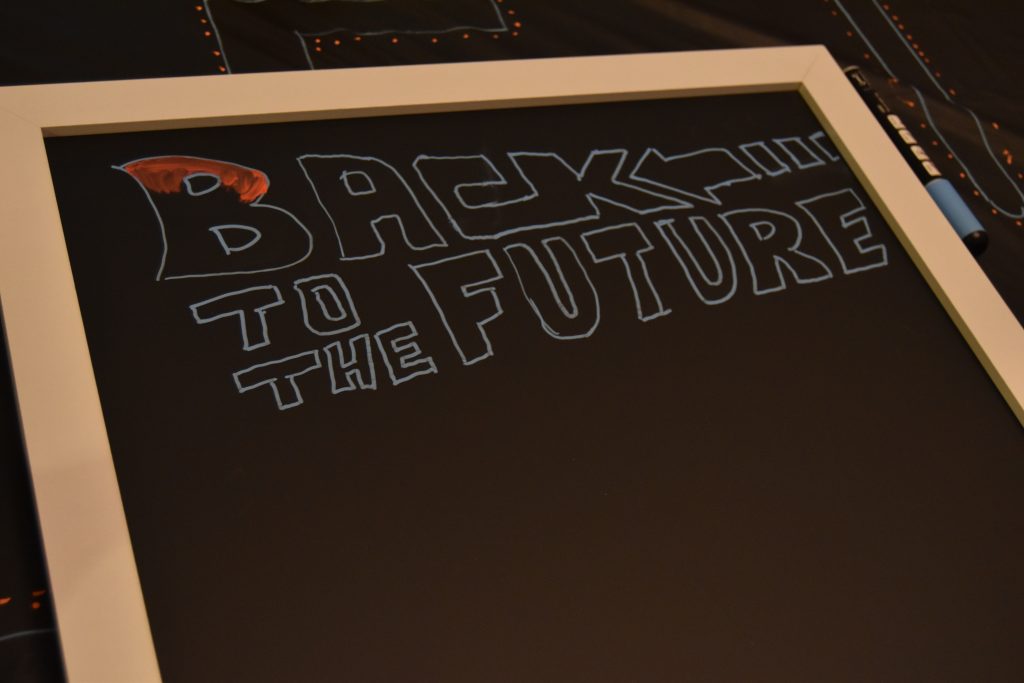 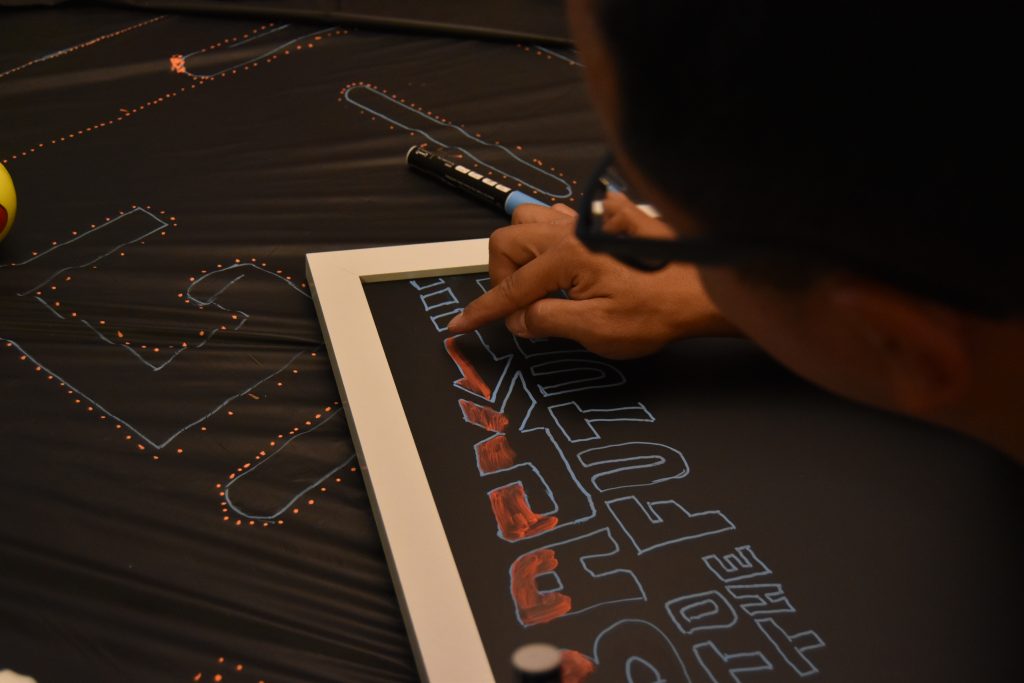 Don’t forget to have some photo opps!  I hung up this 80’s party theme and made a rubics cube for a picture prop.  We got some great party pics and I loved sending parents the pictures of their kids dressed up for the 80’s 😉

Inevitably, tweens will want to head outdoors to the backyard for some fresh air.  Be prepared for this by having some fun things to do outside!

Here’s what we planned for:

We also got some solar patio lights to light up the night!

Here’s what I got for the boys:

The girls had the following:

I provided 3 or 4 cans of spray hair color in case kids wanted to color their hair.  Did you know there are even glow in the dark cans of hair color?!

I provided food that my daughter wanted to order.  This really wasn’t 1980’s inspired.  However, the candy was definitely fun!

I threw these all together in a bag.  I also gave each kid a mini rubics cube!

What about the cake?  We lucked out!  We found a “Saved By the Bell” theme cake at the local grocery store. 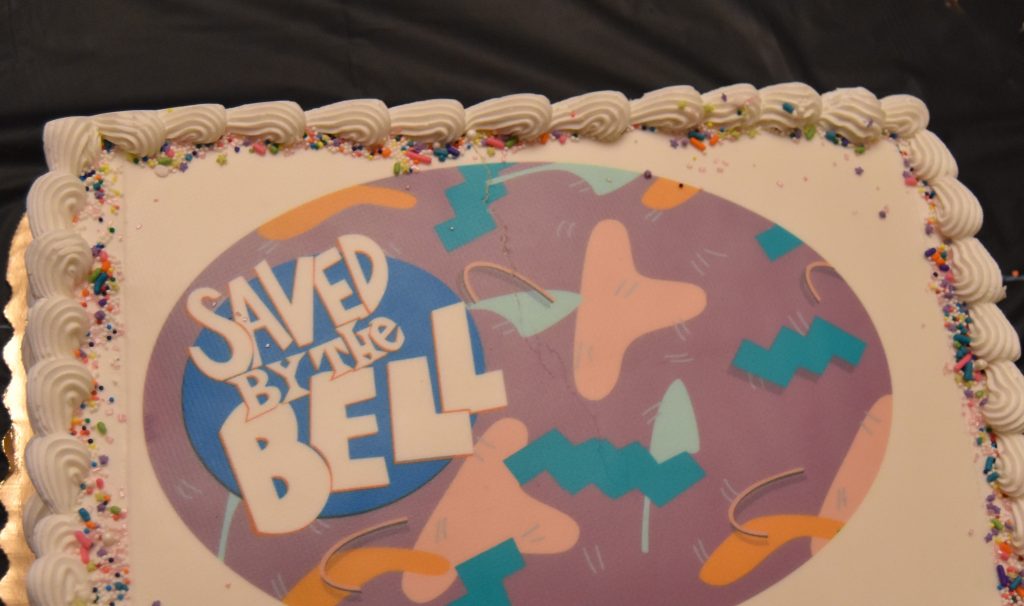 Here are some costume ideas that we each wore:

So what are you waiting for?!  Throw a totally radical 80’s party!  Whether it’s for adults or kids, I guarantee everyone will have a great time.  And if you have to host a party for tweens…best of luck.  We survived.  You will too 😉

Check out some more fun posts:

Fairy Garden: How to Build Your Own!

Beauty and the Beast Inspired  Hair and Nail DIY

« America’s Family Pet Expo: A Pet Lover’s Paradise!
KISS Mini Golf in Las Vegas: Is It Worth It? » 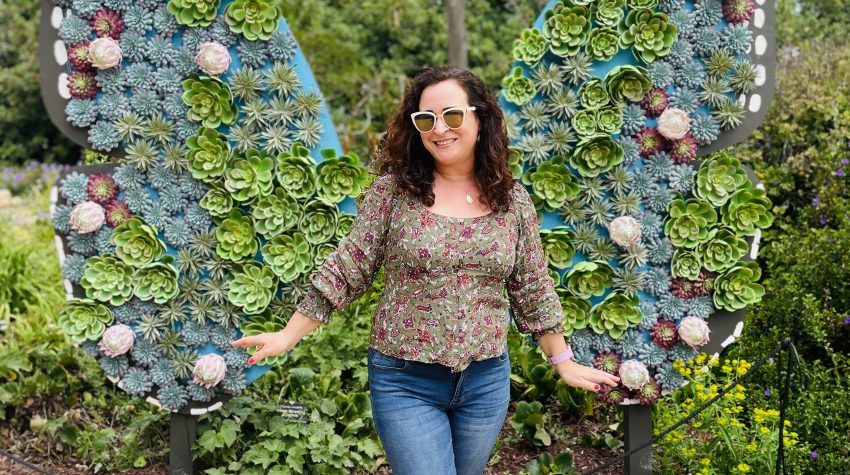 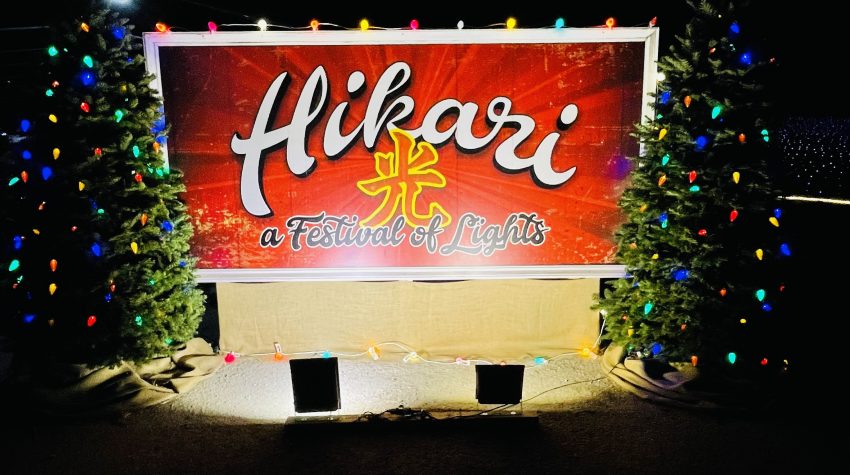 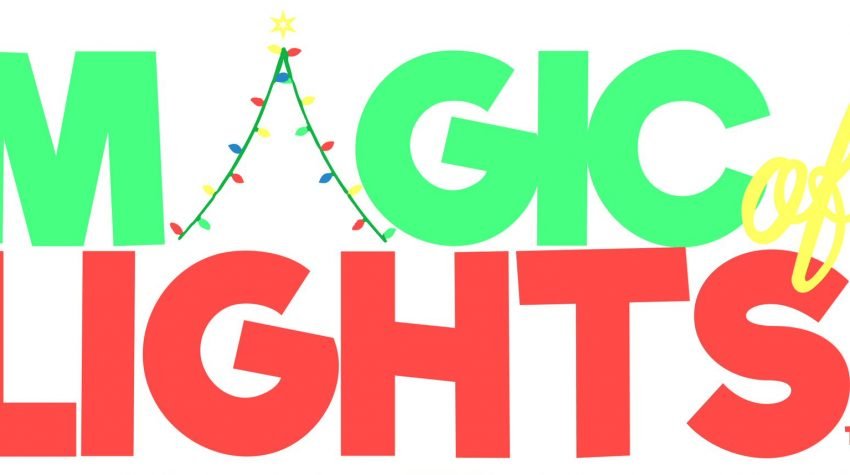