We recently took a SoCal Day Trip to Rosie’s Dog Beach and Open Sesame.  Our boy Jackson really needed a fun trip outside of the house after a week of not feeling well.  The family wanted to enjoy an outing where all family members could participate, and this one did not disappoint!  Be sure to read our tips for visiting Rosie’s Dog Beach at the end of this post!

Disclosure: This post contains affiliate ads.  This site might receive a commission from purchases made through these links. 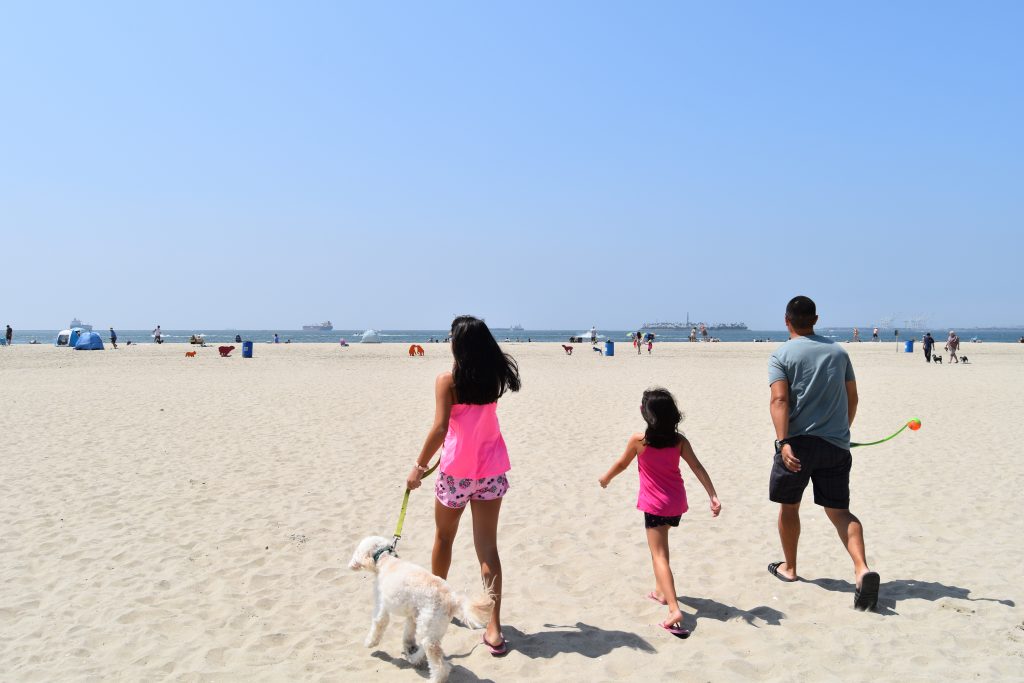 Rosie’s Dog Beach is a 4 acre beach located in the Belmont Shore area of Long Beach, California.  You’ll find the beach on Ocean Avenue, between Granada Avenue and Roycroft Avenue.  The beach is open from 6 a.m. to 8 p.m.  If you bring more than one dog, make sure that there is one adult present for every dog.

We took our SoCal Day Trip to Rosie’s Beach on a Sunday and found that there was plenty of parking.  If you are lucky, you can find free parking on the street.  However, there is also a parking lot with meter parking that is right off of the sand.  We parked in the Granada Lot and were happy to find that we could pay with a card.

Mr. Jackson has been to the beach before and appeared to recognize the smell of ocean air pretty immediately!  He was yanking on his leash to be let go as soon as his paws touched sand.  However, we couldn’t let him go until we had reached the designated border for the dog beach.  Dogs are only allowed to be in the designated dog zone and beach paths.

We let Jackson off the leash once we reached the designated dog beach border.  We thought he would make a run for it, but instead he did this…

Either Jackson’s eyesight is not so good, or he’s just being a dog.

After Jackson’s questionable stop, he ran straight to the ocean. 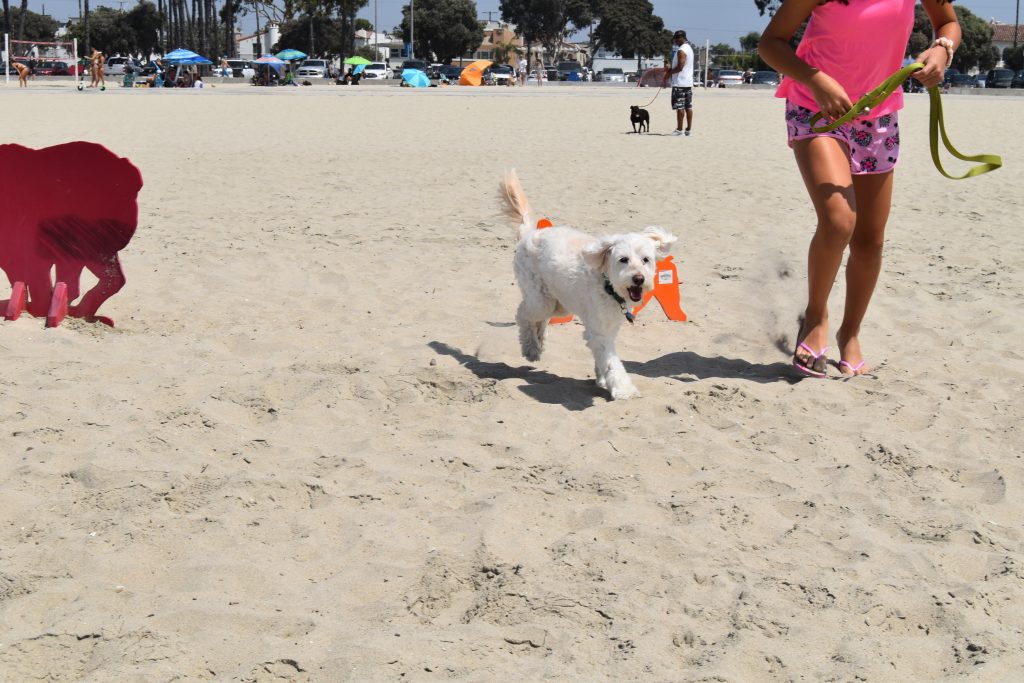 There are a lot of dogs running around, so don’t be surprised when you throw a ball and your dog is not the one to retrieve it.  Sometimes half of the fun is watching a rascal dog keep the ball away from your dog so that they will play with them. 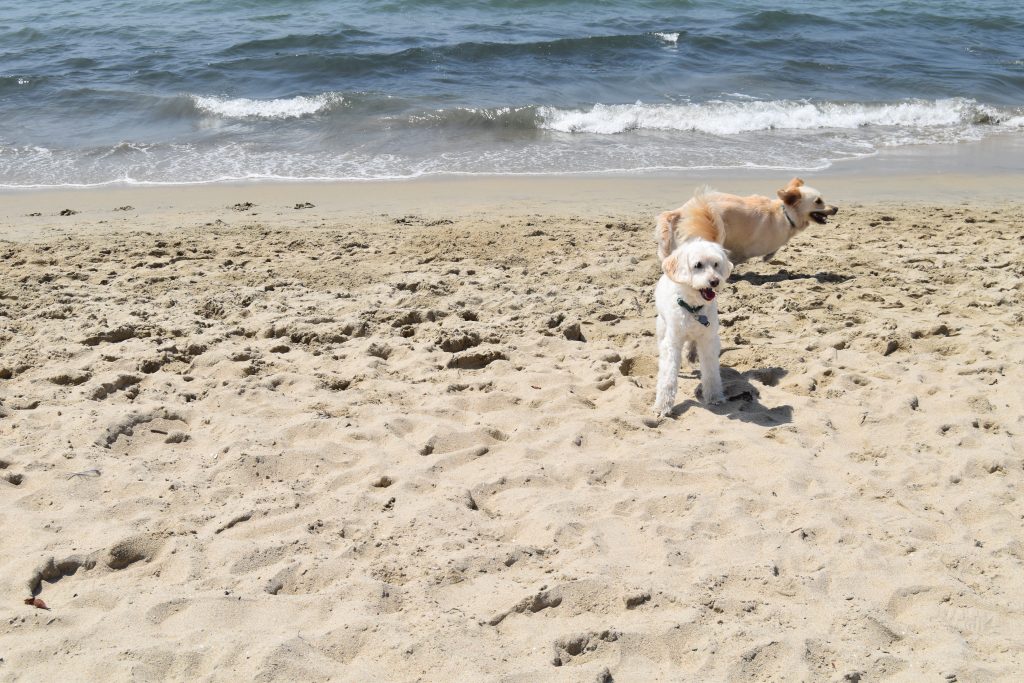 This dog kept running circles around Jackson trying to make a new buddy.

We were shocked to look toward the ocean and find that there were not one, but two people swimming along the shoreline with their dogs!  This was a new one for us!  These dogs were wearing life vests and were just happily swimming along right next to their person.  Check out the video here!

I honestly think the life vest is a great idea if you are going bring your dog to the beach often and are worried about their swimming ability.

While there, we also found that a dog was hungry and looking for some food.  He was sticking his snout into unzipped cooler bags while his person yelled at him to stop.  It was pretty hilarious, but also taught me to make sure to bring closed containers to the dog beach.

Even though it was hot outside, we noticed that Jackson started shaking after jumping in the ocean water a few times.  We realized that he was getting cold with the ocean breeze and decided it was time to go. 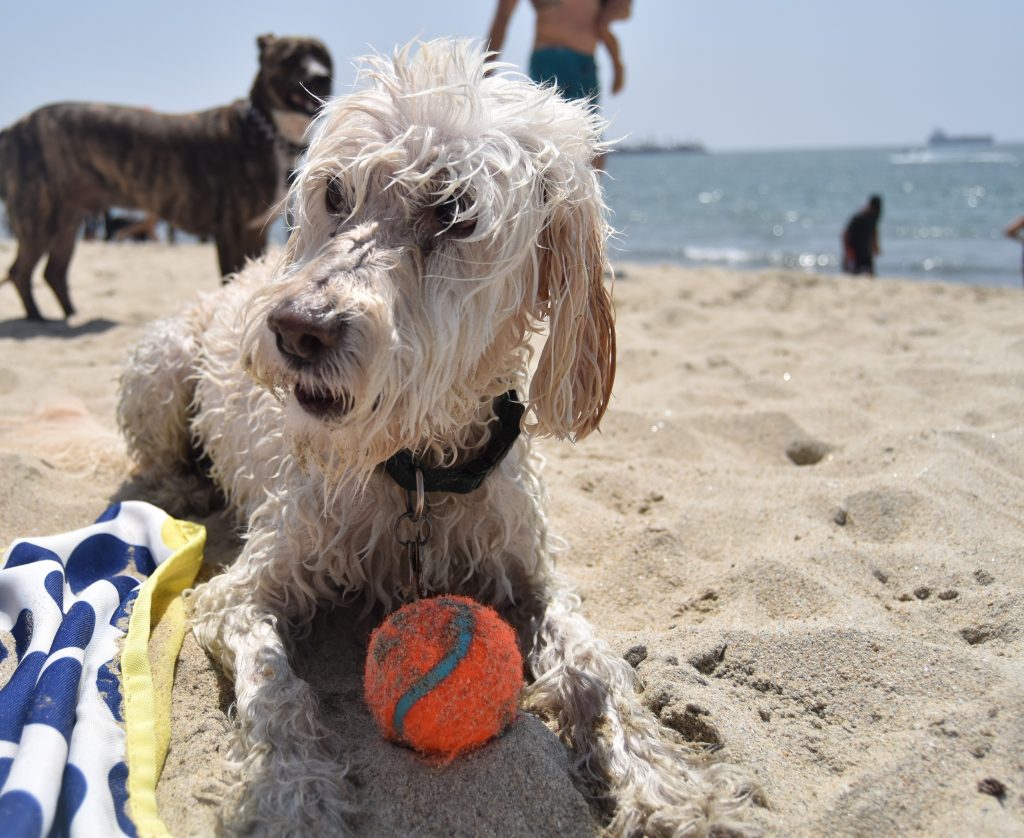 Everyone was starving after the dog beach.  We headed over to Belmont Shore where there are plenty of dog-friendly restaurants with patio seating.

We stopped in at one of my favorite restaurants: Open Sesame.  This is mediterranean style food.  Jackson got to sit outside on the patio with us as we enjoyed the fresh air. 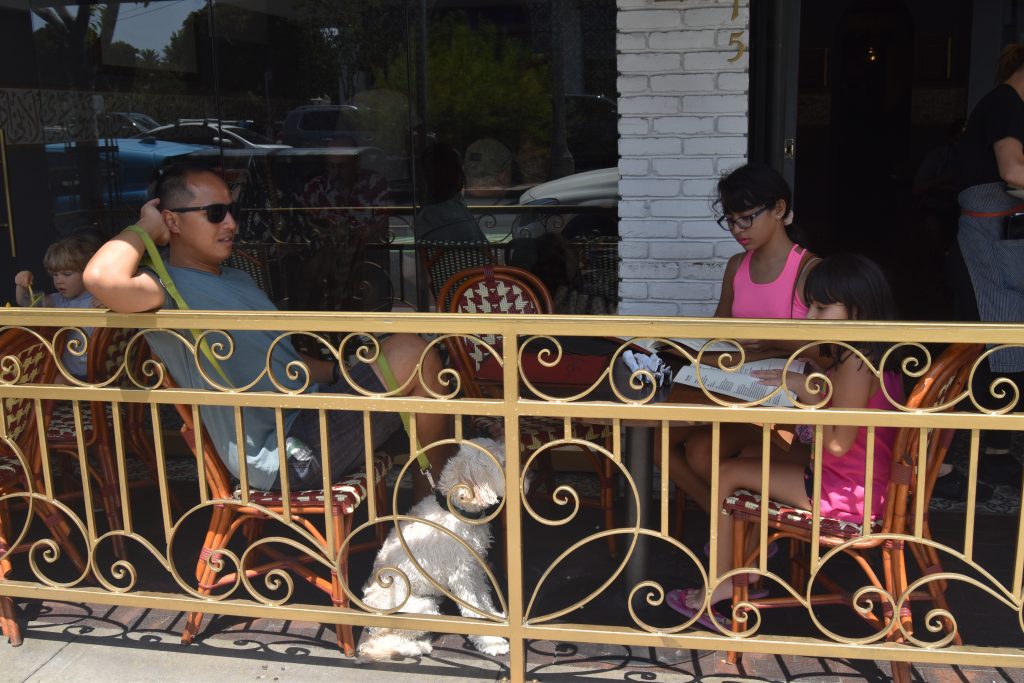 We were happy that Jackson could join us at the restaurant.

We ordered the fried potato appetizer, which is a popular item on the menu. 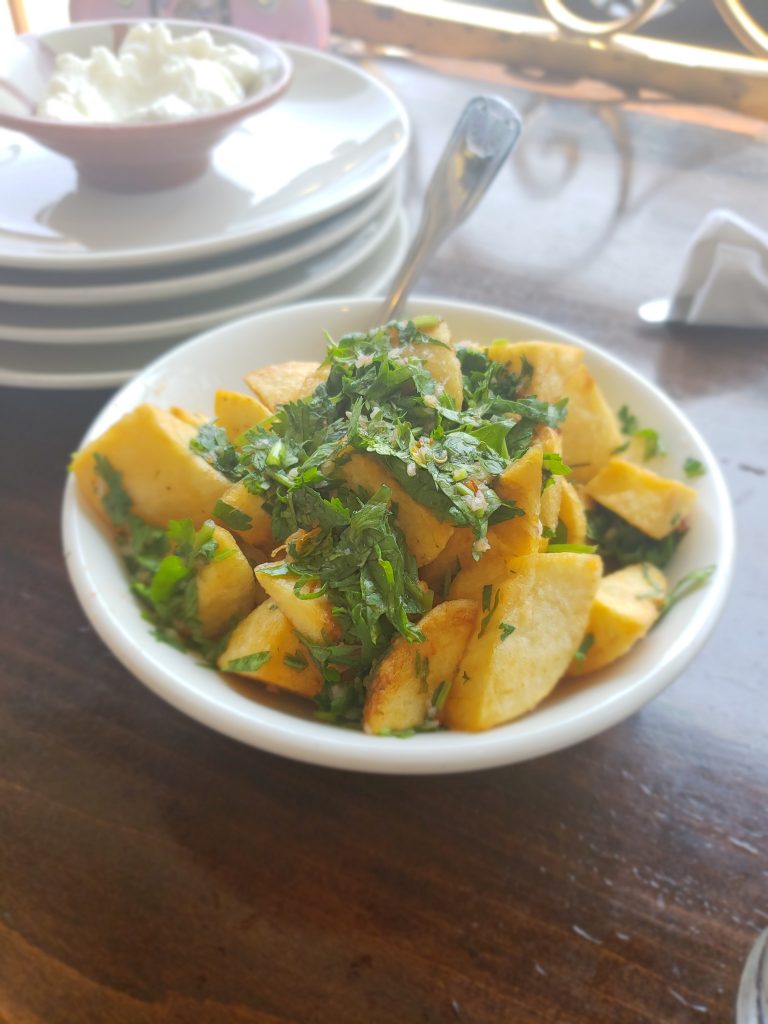 It has lemon juice, garlic, and cilantro- three of my household’s favorite flavors.  If you go to Open Sesame, you must try it.

My kids and I love the Chicken Tawook plate and split two of them among the three of us. 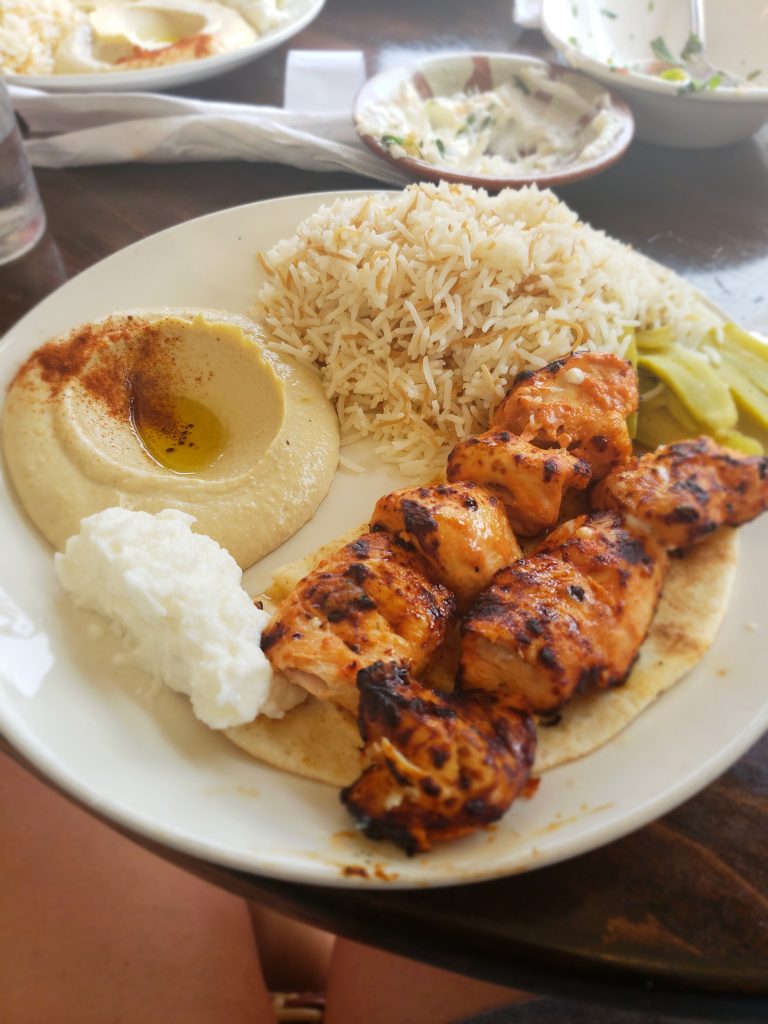 Their dad ordered the Beef Shawarma and said it was excellent. 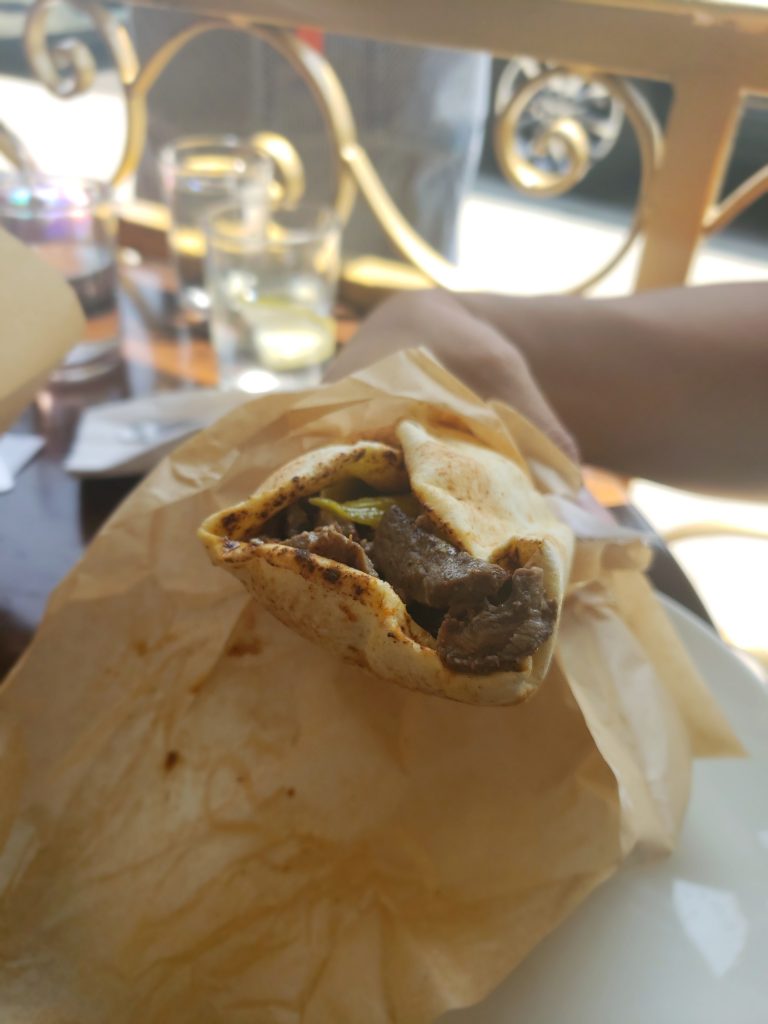 If you’re wondering, Jackson had the chicken we were unable to finish, along with some pita bread.  Check out my boy eating like a gentleman here!  The waitress was kind enough to bring him a disposable container with water.  I told you they were dog-friendly!

If you want another dog-friendly SoCal Day Trip idea, take a look at our post about Huntington Dog Beach here.

« Craft Cart and Homework Station DIY
Brilliant! at The Neon Museum:15 tips for a great visit » 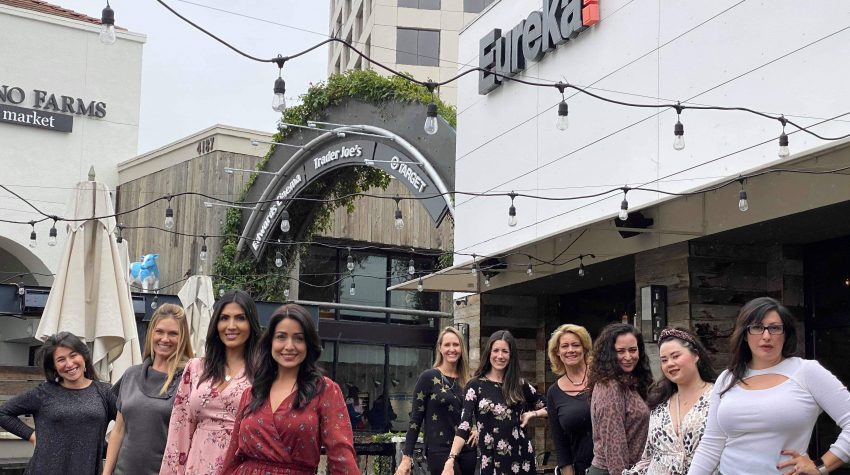 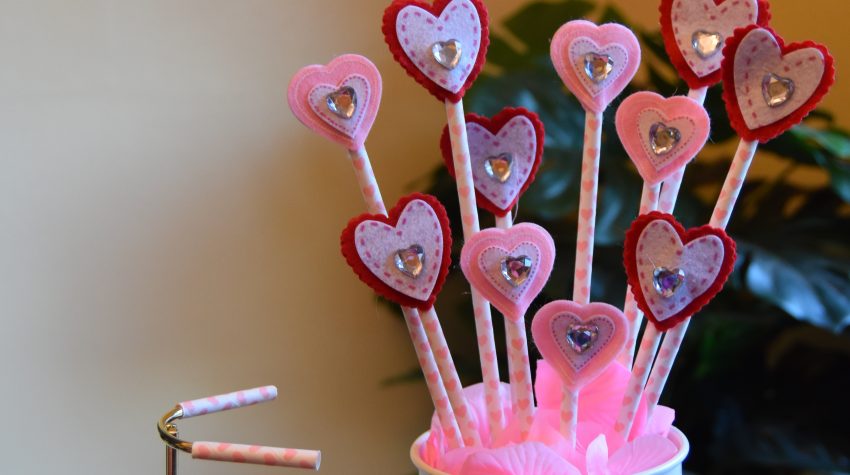 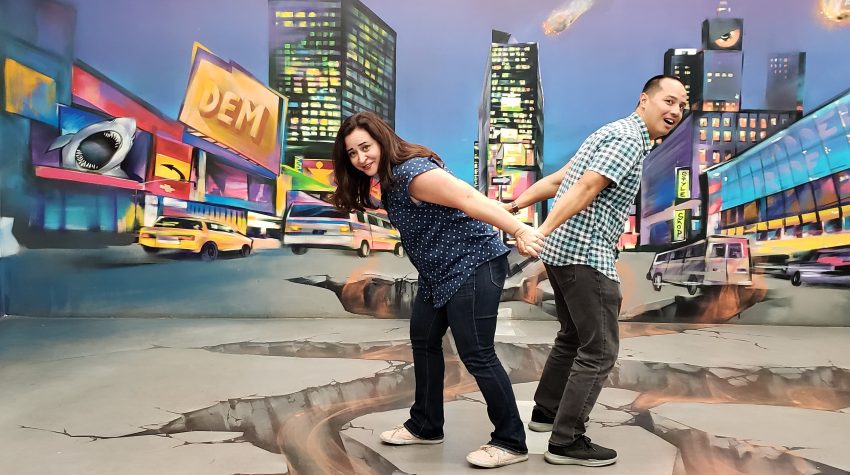